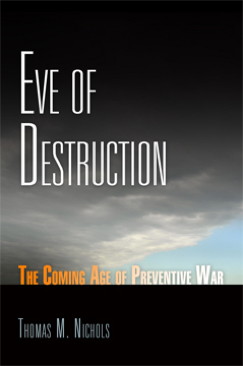 Eve of Destruction is a provocative contribution to a growing international debate over the acceptance of preventive military action. In the first work to identify the trends that have led to a coming age of preventive war, Thomas M. Nichols uses historical analysis as well as interviews with military officials from around the world to trace the anticipatory use of force from the early 1990s—when the international community responded to a string of humanitarian crises in Somalia, Bosnia, and Kosovo—to today’s current and potential actions against rogue states and terrorists. He makes a case for a bold reform of U.S. foreign policy, and of the United Nations Security Council itself, in order to avert outright anarchy.
Thomas M. Nichols is Professor of Strategy and Forrest Sherman Chair of Public Diplomacy [JB emphasis] at the United States Naval War College. His previous books include The Russian Presidency and Winning the World: Lessons for America’s Future from the Cold War.