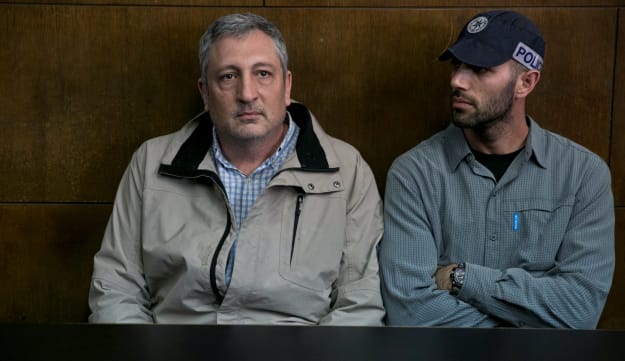 Image from article: Former Netanyahu communications adviser Nir Hefetz in court in May, 2018.

Nir Hefetz
Position: National public diplomacy [JB emphasis] head, personal communications adviser to the Netanyahu family
Date of state’s evidence agreement: March 4, 2018
Suspicions that he was facing: Bribe-taking, along with Netanyahu and obstruction of justice
Information that he supplied against Netanyahu: In Case 4000 he gave an account in which he spoke of a connection between alleged requests to skew Walla’s news coverage and policy decisions made by Netanyahu
The state’s evidence agreement: He will not be charged and will not pay a fine.
Nir Hefetz is a former newspaper editor who served as media adviser to the prime minister’s family. Notorious for throwing his weight around when he wasn’t happy with press coverage of his clients, he was known to be especially mindful of the needs of Sara Netanyahu, the prime minister’s wife.
Hefetz was arrested in connection with Case 4000 over allegations that Bezeq reaped huge financial benefits for allegedly helping the Netanyahu family obtain favorable coverage on Walla. Hefetz was known to be close to Shaul Elovitch, the controlling shareholder of Bezeq, which owned the Walla website. Hefetz was suspected of serving as a key intermediary in the dealings between the Netanyahu family and Walla.
Hefetz’s association with Netanyahu began in 2009, when he was appointed chief spokesman for the prime minister, then beginning his second stint in office. Hefetz’s time in the Prime Minister’s Office was brief, but in 2014, he began working with Netanyahu again, this time as a media adviser for the prime minister’s family. His services were provided through a private consultancy company he established. During the 2015 Knesset election, Hefetz also worked as a campaign strategist for Netanyahu’s Likud party.
As part of the state’s evidence agreement with Hefetz, he provided the police with text messages and recordings from 2009 and 2010 that purportedly buttress the suspicions against Netanyahu. They relate primarily to Case 2000 and early contacts over a “cease-fire” between the prime minister and Yedioth Ahronoth.