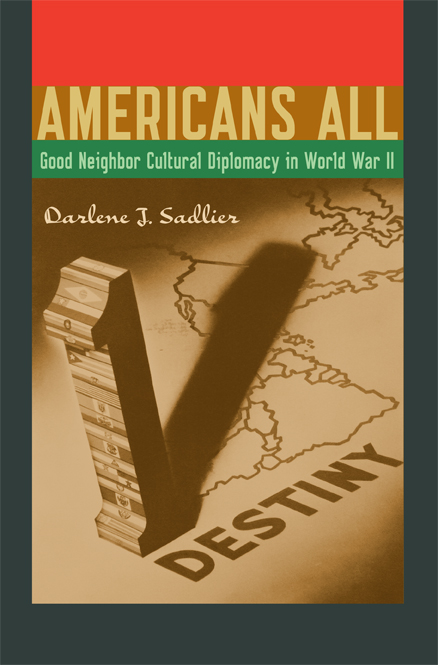 Darlene J. Sadlier investigates how the U.S. used cultural diplomacy to promote “hemispheric solidarity” during the Second World War in her new book Americans All: Good Neighbor Cultural Diplomacy in World War II. During this era, the U.S. Office of the Coordinator of Inter-American Affairs employed film, radio, media, and art to convince Americans of the importance of Latin American relations, and to explain to Latin Americans that the U.S. sincerely valued its southern neighbors. Sadlier shows that WWII truly was global, with soft battlefields expanding beyond the war’s military footprint.

“In an era in which culture plays an unprecedented role in foreign policy, Darlene Sadlier has provided a remarkable study of how cultural diplomacy worked in the past. Americans All is an invaluable study of the massive cultural diplomacy campaign undertaken by the USA to woo Latin America during the Second World War. Meticulously researched and engagingly written, the book presents us with the best and the worst of this fascinating enterprise and in so doing provides both a unique window on inter-American relations and an invaluable study of the power and the limits of culture in international affairs.”

Learn more about the book here.

Director of the Portuguese Program
Professor, Department of Spanish and Portuguese