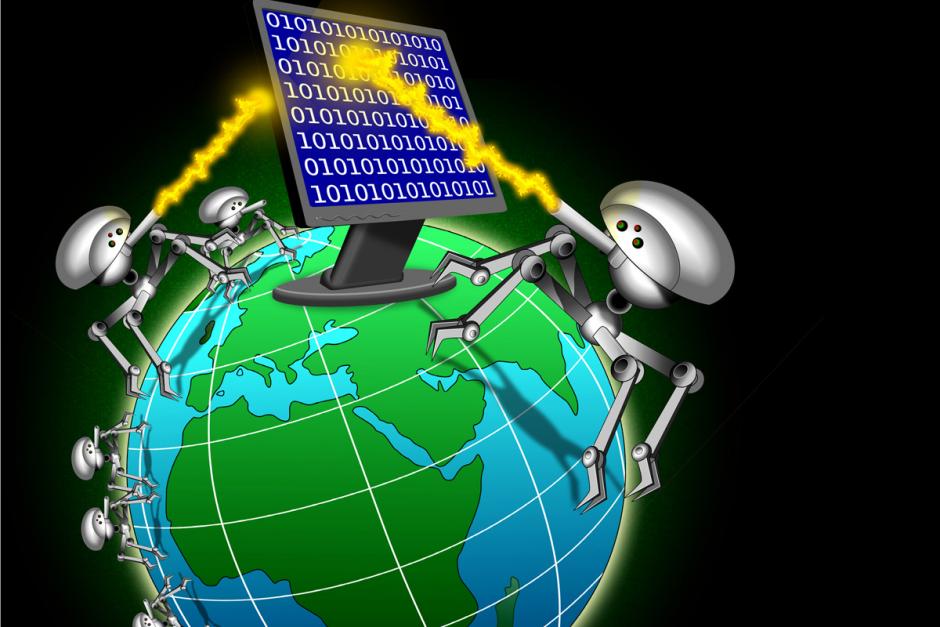 Gennady Yevstafiev, Retired Lieutenant General of the Russian Foreign Intelligence Service, talks on the evolution of the Internet from a social networking platform to an international cyber-battlefield

It is not already a fancy chiller but it something of a practical nature. And we are more and more getting involved into the wars of the 21st century, and those wars slowly but surely are moving to outer space and cyber space. Of course Internet is still operating and it has not been broken but there is already a danger, numerous dangers I would say. Of course most of the people think these are the dangers of economic crimes. That’s true, it is very important but it is nothing new. The danger lays more and more in the field of protection of the users of personal data and this protection is inefficient still. And I would say that people in Russia are yet to understand that many people using American network sites are at very big risk because through these network sites a lot of information is leaked out of Russia and not only to the US but also to the data processing centers in developing countries.

We are witnessing very complicated viral attacks. Such viruses are the Flame which were mostly aimed at collecting secret data and information, and scanning and monitoring the social networks are complemented by extremely dangerous viruses like the Stuxnet and Duqu which are aggressive viruses, which destroy certain governmental, but not only governmental but also private information systems and put the operation of certain entities into a complete chaos. And so we are facing a very dangerous situation.

But the Americans are saying – no, we are not going to excuse for using the cyber space for international politics. They say that we want to make the diplomacy digital, and that means it should be digital and contemporary, and effective. And it is one of the greatest tasks of American diplomacy – we are fighting the censorship, we are not trying to achieve hidden purposes and we want to allow people around the world freely communicate with each other. So, that’s what we have and they consider that digital diplomacy is one of the major and the most effective instrument of American foreign policy. And in Russian foreign affairs they call this digital diplomacy the new method of colonial activity.

So, you see the real extremely serious differences around the whole thing. And of course some naïve people who are using the social networks, they believe that everything is ok, very good and safe. But I would like to mention the American reports that in the CIA there is a special unit which every day monitors up to 5 million settings in Twitter, and then on Facebook and other social networks. They analyze them and they are considered to be a very important source of information for the American state institutions, and especially for the military units of the American Army which are collecting information about possible rivals about the real state of affairs in particular countries. And I would say what you’ve mentioned is nothing new because it appeared last year.

And I think 2011 was a crucial year because the American Government has undertaken a new doctrine of cyber information security and it was adopted by the Obama Government. And this Obama Government immediately developed it into a very sophisticated and broad system of approaches because this Mr. Howard Schmidt – the assistant of Obama Government on cyber security – insisted that it is extremely important for the American Government to sophisticate and develop and to be an undisputed leader in the field of controlling the cyber space. It was in July last year, and I think in August last year Pentagon immediately produced its own doctrine of controlling cyber space and it has been a really very sophisticated idea because it is called the Social Media in Strategic Communication (SMISC) and it is at the moment the governing doctrine of the Pentagon in the cyber space. You know, the focuses are made exclusively on the control and monitoring of social services.

On the other hand it is funny when some other countries are trying to buy some technological gadgets for the same purpose, they are trying to really prosecute them. For example there is an investigation case of the so called Bluetooth systems Sunnyvale of California which was trying, and I think sold some equipment to Syria. And it has been prosecuted because it was found that they worked against the interests of the state. So, the idea is to control the cyber space. And I think the further development is clearly underlined by a creation in Germany of the center to fight the cyber threats which is aimed at exposing, monitoring and taking measures against the threats in the field of cyber security.

The problem here is very serious because in 2001 American Administration under Mr. Bush has confirmed the previous decision of Mr. Nixon about War Powers Resolution, after 9\11, and they are now operating on the basis of this War Powers Resolution, Obama has accepted the idea. And the idea is that any attack on the US by whatever groups – governmental or private terrorist group – in the cyber field, any attack on the American military installations and Pentagon or governmental installations is considered to be an attack on the security of the US and could be responded with all the might of the US including the weapons of mass destruction, including the nuclear arms.

So, having said that they really don’t care about the way they are performing. And the problem is – in the field of cyber space it is very difficult to identify the source of attack. And as it stands now, maybe in the future it will be a different thing, but as it stands now they are trying to cover themselves with the idea that nobody will find the source of the state attack which Americans are trying to perform because everybody is really sure that attacks on Iran, Stuxnet, Duqu and Flame are originating from the efforts of American-Israeli state sources.

So, in this sense we are facing a tremendously dangerous situation which is quickly arriving to the international arena and we should be trying to stop it because it could become too late. And when people claim that they would fight for freedom and security of the United States including Internet with the means which go beyond the framework of Internet, that is something which is getting very dangerous. And for example the head of the Joint Chiefs of Staff Admiral Michael Chertoff, he said that though the definition of the source of a cyber attack is an extremely difficult issue, nevertheless they are going to respond to this cyber attack with any possible means.

And of course we understand the Americans because people say that for example hacker attacks on the American military Pentagon institutions led to the leakage of 24 000 important from the military point of view files and what is happening is exposing the American foreign policy. And we know, even the WikiLeaks is something which is extremely devastating to some of the American claims about the purposes and aims of their foreign policy.

You know, the Deputy Foreign Minister of the US, there is some Mr. William III, he is really handling the issue, he said that the US would consider the cyber space as a potential battlefield. This comes from the American defense strategy for operating in the cyber space which I’ve mentioned before, it is really absolutely the same idea of considering the cyber space as the battlefield in the field of international affairs. The Americans being in the lead on the technological side are trying to use Internet to their own interests. The worry of the people in the field of Internet being used for political purposes and military purposes by the American side is in the minds of very important countries. For example China, Russia and some others have proposed international code of conduct for information security.