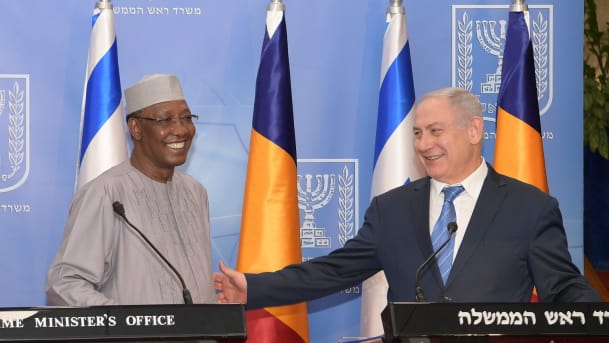 image from, with caption:
A joint press conference of Prime Minister Benjamin Netanyahu and Chad President Idriss Déby in Jerusalem, November 25, 2018.
“Isolation” is a word never far from the mouths of Israeli diplomats when discussing their country’s geopolitical predicament. Since its creation, Israel has bemoaned what it terms its undue isolation in the Arab and Muslim world.
With the signing of peace agreements with Jordan and Egypt, this was greatly diminished, to be sure. But Israelis still believed themselves alone in a sea of enemies.
That, at least, has been the official line. In reality, through the sale of weapons and technology, it has cultivated unofficial allies across the region and around the globe. The re-establishment of diplomatic relations with Chad this month is powerful evidence to this point.
As part of an international campaign to encourage investment and to highlight his own diplomatic clout, Israeli Prime Minister Benjamin Netanyahu has been busy. From cozying up to Jair Bolsonaro, the newly elected president of Brazil, to visiting Oman’s Sultan Qaboos, Netanyahu has made it his mission to expand the list of Israel’s allies.
This strategy extends deep into Africa, where Israel has a checkered history. Official ties between Israel and Chad were cut 47 years ago because of pressure on Chad from Libya’s leader, Muammar Gaddafi. However, unofficial ties continued to flourish for decades. Weapons sales that might have violated international law have long fueled Israel’s secret alliances across Africa, and Chad is no exception.
After Chadian President Idriss Deby made a surprise visit to Jerusalem in November, it was only a matter of time before ties were upgraded. The ability to buy weapons and commercial technology from Israel is a primary motivation for Chad in thawing relations. The fact that Israel maintains highly influential partnerships in Washington will also be seen as an extra benefit to Chad’s leaders.
The new, and official, Israel-Chad relations highlight just how sidelined the Palestinians are in the Muslim world today. Just a decade ago, establishing official relations with Israel would have been out of the question for a Muslim-majority country. While unofficial relations went, at the very least, uncommented on, public diplomacy [JB emphasis] with Israel was off limits.
This is no longer the reality. Muslim leaders have apparently tired of the Israel-Palestine impasse, and no longer feel the need to conceal their relationships with Israel, with which they calculate they have more to gain materially and strategically. In the ongoing confrontation with Iran, for example, Israel has deepened its alliance with the most powerful countries in the Arab world.
The Palestinians stand as the biggest loser in this reshuffling of power alliances. And there is no evidence these developments will ebb.
Israel’s new diplomatic outreach serves an important duty for Netanyahu’s own political future. With elections planned for April, he is using foreign policy as a vote getter. From highlighting his relationship to US President Donald Trump and the administration’s subsequent decision to relocate the US Embassy to Jerusalem from Tel Aviv, to the opening of new partnerships around the world, Netanyahu is playing politics with the very idea of geopolitical isolation.
Speaking to reporters after the restoration of ties with Chad, the Israeli leader said, “We are making inroads into the Islamic world. We are making history and turning Israel into a rising world power.”
Doubling down on the Chad news, officials at Netanyahu’s office said the prime minister would soon travel to Mali for a “historic” meeting with that West African country’s prime minister, Soumeylou Boubeye Maiga. Mali-Israel relations were officially severed after the 1973 Arab-Israeli war, but back channels have long existed between the two countries.
What is remarkable about Netanyahu’s foreign-policy playbook is that it is not particularly new or groundbreaking. In the 1950s, the nascent Israeli state began an aggressive push in Africa for new allies. Focused on newly independent African countries (with newly minted voting power at the United Nations), Israel created a network of alliances by exporting weapons and agricultural infrastructure.
This policy lasted until the mid-1960s, when Israel decided to embrace apartheid South Africa and embark on a far-reaching, and often clandestine, partnership with that pariah country. As a result, Israel’s Africa policy frayed. But with apartheid South Africa now long gone, Netanyahu is rekindling the embers of his country’s Africa initiative.
That said, neither Israel’s diplomatic offering to African countries like Mali or Chad nor its relations with the Palestinians has truly changed. What has developed recently is that Palestinians have been relegated to the sidelines by their hitherto supporters.
Of course, the overwhelming majority of people in the Muslim world still support the Palestinian cause. But their leaders now calculate that there are other diplomatic exigencies – Iran being the one concern that Israel and many Arab countries can agree about – that force a recalibration of their hierarchy of goals.
Original Article