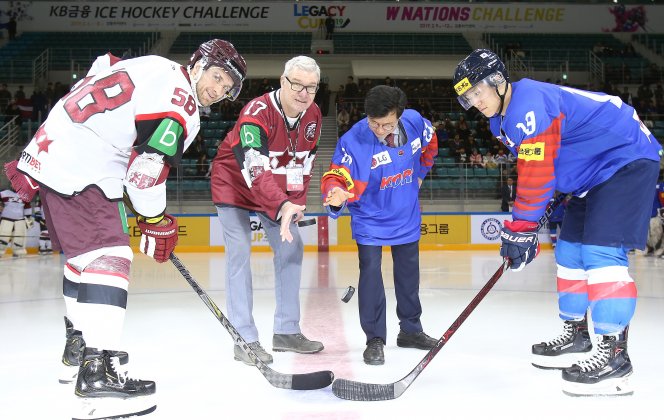 uncaptioned image from article
From 6 to 8 February, the Latvian men’s national hockey team took part in a special tournament in South Korea’s Olympic city Gangneung held to celebrate the first anniversary of the 2018 Pyeongchang Winter Olympics and played against South Korea, Japan and Kazakhstan. The Latvian team, consisting mainly of players from Latvian hockey clubs, with two wins and a loss to Kazakhstan in overtime, placed second, representing our country excellently.
From 9 to 12 February, the women’s national team, taking part in a tournament of a similar format and competing with South Korean and Hungarian teams, won one point and placed third. Our girls fought hard but fortune was on their adversaries’ side this time. The Latvian-South Korean match, broadcast live on television, was watched by several hundreds of thousands of viewers.
In the context of bilateral relations between Latvia and South Korea, the tournaments were a unique opportunity to raise Latvia’s profile in South Korea and demonstrate the high level of Latvian hockey in the Gangneung Hockey Centre, where regrettably the Latvian national team did not have a chance to play during the 2018 Olympics tournaments. This is part of public diplomacy [JB emphasis], in which our athletes hold an important place by both popularising ice hockey and making the name of our country heard in South Korea. The Embassy offers special thanks to the Latvian Hockey Federation and its Vice President Viesturs Koziols, and the Korea Ice Hockey Association for organising the Legacy Cup tournament with participation of the Latvian teams. The Korean national ice hockey team might visit Latvia at the end of the year and play in a tournament hosted by Latvia.
Press Contacts:
Embassy of the Republic of Latvia in the Republic of Korea
Address: 29, Hannam-daero 36-gil, Yongsan-gu, Seoul, 04417, Republic of Korea
Telephone: (02) 2-2022-3800
Fax: (02) 2-2022-3803
E-mail: embassy.seoul@mfa.gov.lv
Homepage: http://www.mfa.gov.lv/en/seoul
Original Article