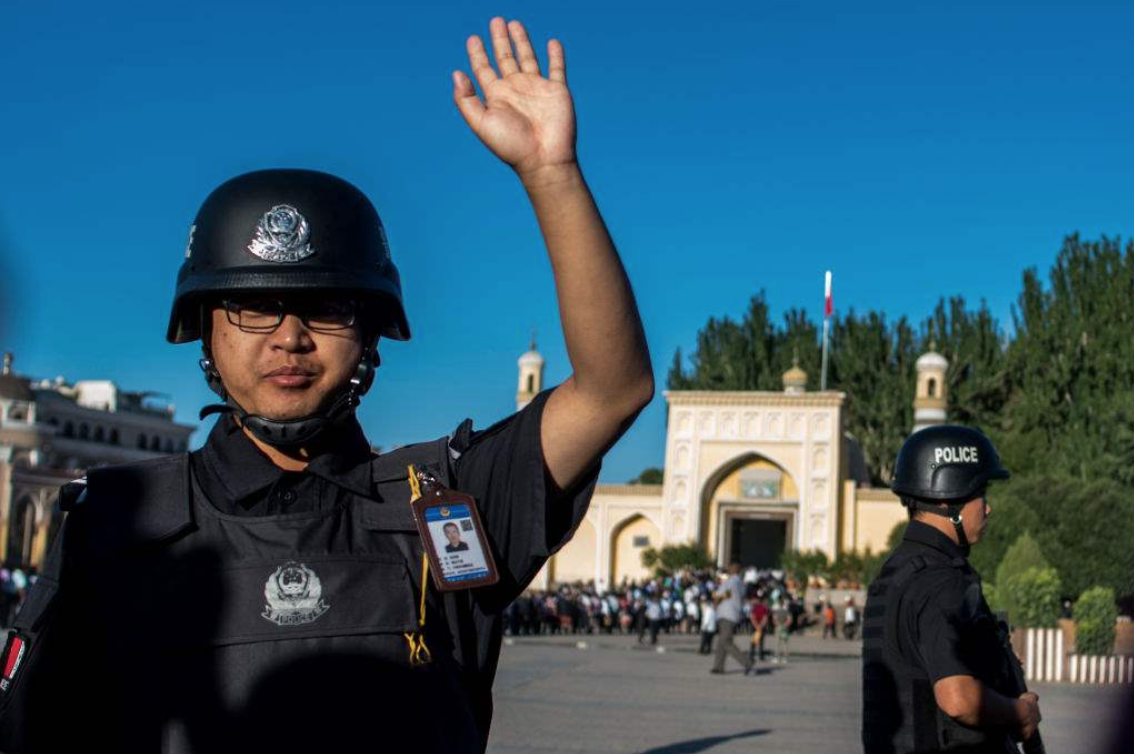 Image from article, with caption: A policeman gestures as Muslims arrive at for morning prayer in China’s Xinjiang Uighur Autonomous Region
Excerpt:

Amnesty International USA is mobilizing its two million members and supporters behind two key pieces of human rights legislation — S. 178, the Uighur Human Rights Policy Act of 2019, and the UIGHUR Act. Senator Marco Rubio (R-Fla.) and 20 other Senators introduced the Act of 2019. The UIGHUR Act of 2018 (H.R.7384) was initiated by Congressman Brad Sherman (D-Calif.) and four other legislators. Up to one million Uighurs and other ethnic minorities are being arbitrarily detained in so-called “re-education camps” –an afront to international human rights law. The new Congress needs to assert its leadership on this key human rights issue and swiftly pass legislation without haste.
While commentary on the legislation has centered on targeted sanctions, the legislation has other components which will significantly shape U.S. policy as it confronts this human rights crisis in the Uighur region. … In order to follow U.S. policy on China look closely to how these bills make their way through Congress. They will be important barometers for whether Congress plans to elevate and apply pressure on China’s human rights record, particularly on Xinjiang Uighur Autonomous Region. …
On personnel issues the Uighur Human Rights Policy Act creates a new position within the Department of State which would serve as the United States Special Coordinator for Xinjiang Uighur Autonomous Region who would “coordinate diplomatic, political, public diplomacy, financial assistance…” within the U.S. government. Special envoys or elevated positions can be a useful tool to marshal the full forces of the U.S. government, cut through bureaucracy, and elevate the role those issues play in our foreign policy — however, its success will ultimately depend on the political will bestowed on the position and whoever gets appointed to it. Take for example, the Special Coordinator for Tibetan Issues position, which has remained vacant now for years while policy on the issue atrophies. The Ambassador for International Religious Freedom position, however, has helped the Trump Administration elevate the issue, in part due to high-level engagement from senior level officials across government (State, USAID, USUN) and by a high-profile candidate to fill the position. With no confirmed U.S. State Department Assistant Secretary for Democracy, Human Rights, and Labor or an Assistant Secretary for East Asia and the Pacific, having credible and empowered personnel on Asia human rights issues will be critical. …