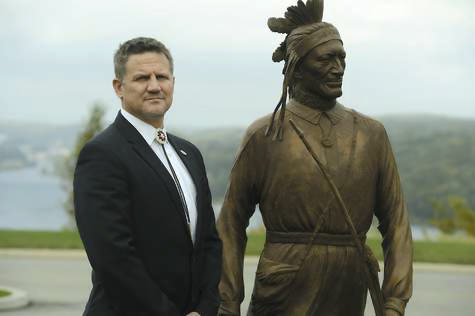 Image from, under the headline:Meet Native America: Kevin P. Brown, Chairman of the Mohegan Tribe
Kevin “Red Eagle” Brown has informed the Mohegan Tribal Council that he would step down as chairman of the Mohegan Tribe for personal reasons effective immediately, according to a statement from Charles F. Bunnell, chief of staff for the Mohegan Tribe.
Brown will remain as a member of the Tribal Council and Mohegan Gaming & Entertainment Management board which oversees gaming entities across the country as well as two professional sports teams, Bunnell said.
Mohegan Sun and the Mohegan Tribal Gaming Authority own the New England Black Wolves professional lacrosse team and the Connecticut Sun women’s basketball team of the WNBA.
The Tribal Council has asked vice chairman James Gessner to assume the role of interim chairman for the foreseeable future, Bunnell said.
The Mohegan Tribe of Connecticut owns Mohegan Sun Pocono in Plains Twp.
Brown was elected chairman of the Mohegan Tribe in October 2013 and he was in the midst of his second term. He replaced Bruce “Two Dogs” Bozsum as chairman.
In November 2013, Brown came to Mohegan Sun Pocono to cut a ribbon to mark the opening of the $50 million, seven-story hotel and convention center at the Plains Twp. casino.
In February 2017, Brown announced the resignation of Bobby Soper as president and chief executive officer of the Mohegan Tribal Gaming Authority.
Under Brown’s leadership, the Mohegan Tribe expanded its footprint worldwide including the Inspire Integrated Resort in South Korea expected to open in 2020 and a multi-million dollar non-gaming tourist destination in Connecticut, creating hundreds of jobs and driving economic growth in the region.
A native of Montville, Connecticut, Brown served in the U.S. Army and retired as a highly-decorated Colonel.
His 25-year career has included extensive experience in strategic planning, combat leadership and leading large military and civilian organizations while managing multi-million dollar budgets and forging international relationships.
Brown is a doctoral candidate in security studies from Kansas State University and he earned a master of arts degree in public diplomacy [JB emphasis] from Norwich University, a master of science degree in operations research from the Naval Postgraduate School and a bachelor of science degree in aerospace engineering from the U.S. Military Academy at West Point.
Gessner is in his fourth term on the Tribal Council and served as corresponding secretary prior to becoming vice chairman, according to the Mohegan Tribe’s website. He is a member of the Audit Committee for Mohegan Gaming & Entertainment.
Gessner holds a bachelor’s degree in hotel and restaurant management from the University of Southwestern Louisiana and prior to his terms on the council, he held executive positions at Mohegan Sun in the marketing and player development divisions.
He resides in Waterford, Connecticut with his wife, Carol and children, Nicholas and Nola.
Original Article