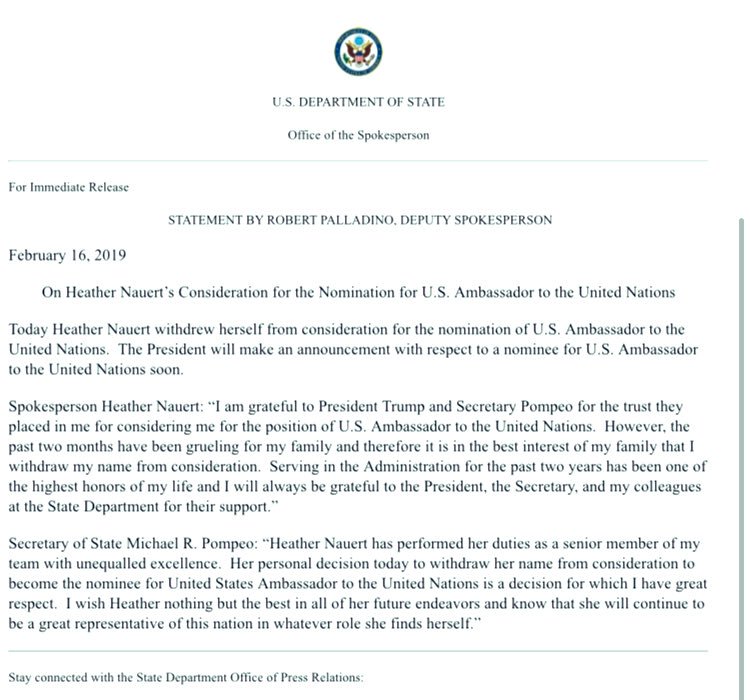 diplopundit.net, Posted: 12:30 am EST
We’re late on this but apparently, Heather Nauert who was publicly announced as nominee to be the next U.N. Ambassador has withdrawn herself from consideration citing “the past two months” as “grueling” for her family. Her statement released with the State Department announcement on February 16 says that “it is in the best interest” of her family to withdraw.Bloomberg News says “Trump’s pick for UN ambassador had employed a nanny who was in US legally but didn’t have a US work permit.”Wait. When was this nanny hired? The spokesperson job does not require senate confirmation but like almost all jobs at the State Department, it requires a security clearance. So are they saying that the nanny issue, if that was the issue, did not come up during her initial vetting when she first came to State two years ago?MSM is also reporting that Ms. Nauert is not expected to return to her State Department jobs. Until her announced nomination, she was the department spokesperson, and for a while, she was also the Acting Under Secretary for Public Diplomacy [JB emphasis] and Public Affairs, after the Senate-confirmed “R” Steve Goldstein was fired with Rex Tillerson. In August 2018, the State Department appointed career FSO Robert Palladino as deputy spokesperson. But to-date, no one has been announced to succeed her as spokesperson, and there’s not even an acting spokesperson.In any case, the post of UN Ambassador is up for grabs again, and some names we’ve heard before, we are hearing once more. The Apprentice UN Edition is now on, people! So exciting dammit, I nearly micturated!A side note —At times, though not always, the State spokesperson is also dual-hatted as the Assistant Secretary of State for Public Affairs. The assistant secretary position used to be Senate-confirmed but P.L. 112-116, the Presidential Appointment Efficiency and Streamlining Act of 2011 (signed into law August 10, 2012), removed the requirement for Senate confirmation of Assistant Secretaries of State for Public Affairs.Anyone remember why this was done?You should know that on February 5, Secretary Pompeo delegated to Assistant Secretary for Public Affairs Michelle Giuda the authorities of the Under Secretary of State for Public Diplomacy and Public Affairs (R). Her official title is “Senior Official for Public Diplomacy and Public Affairs and Assistant Secretary, Bureau of Public Affairs.It appears that the State Department is just going with “senior official” now and no longer even make use of the “acting” title for officials. It also appears that the State Department no longer adhere to the previous practice of only appointing Senate-confirmed officials in “acting” capacity (don’t remember senior officials as responsible for their bureaus prior to this administration). We should note that only one official at the “R” bureau has been confirmed by the Senate, that’s the Assistant Secretary for Educational and Cultural Affairs Marie Royce (and spouse of former HFAC chair Ed Royce).Is this Pompeo’s version of Trump’s “I like acting. It gives me more flexibility.”Related posts:

194 people are talking about thisTwitter Ads info and privacy

The New York Times
✔@nytimes
Former "Fox & Friends" host Heather Nauert withdrew from consideration for the U.S. ambassador to the U.N. post because she had a nanny without a proper work visa, according to people familiar with the process. https://nyti.ms/2DOtWJk
37311:45 AM – Feb 17, 2019Twitter Ads info and privacy

The former “Fox & Friends” host withdrew from consideration because she had a nanny without a proper work visa, according to people familiar with the process.nytimes.com

286 people are talking about this

Kylie Atwood
✔@kylieatwood
NEW ELEMENT: Nauert not expected to return to her job as State Dept spox either, sources tell me & @jamiegangel – note that in the Pompeo stmt he wishes her “nothing but the best in all of her future endeavors”
CNN Breaking News
✔@cnnbrkHeather Nauert has withdrawn from consideration as US ambassador to the UN. Her nomination had not been sent to the Senate. https://cnn.it/2BAoyJp

255 people are talking about this

Andrea Mitchell
✔@mitchellreports
#HeatherNauert is expected to return to NY where her family remained during her 2 years at State Dept according to people close to her. She leaves with high praise from @SecPompeo
2939:40 PM – Feb 16, 2019Twitter Ads info and privacy

194 people are talking about this

Nauert Withdraws as Trump's Nominee for Ambassador to the UN

State Department spokeswoman Heather Nauert withdrew from consideration as President Donald Trump’s nominee to be ambassador to the United Nations, she said in a statement.bloomberg.com

120 people are talking about this
Original Article