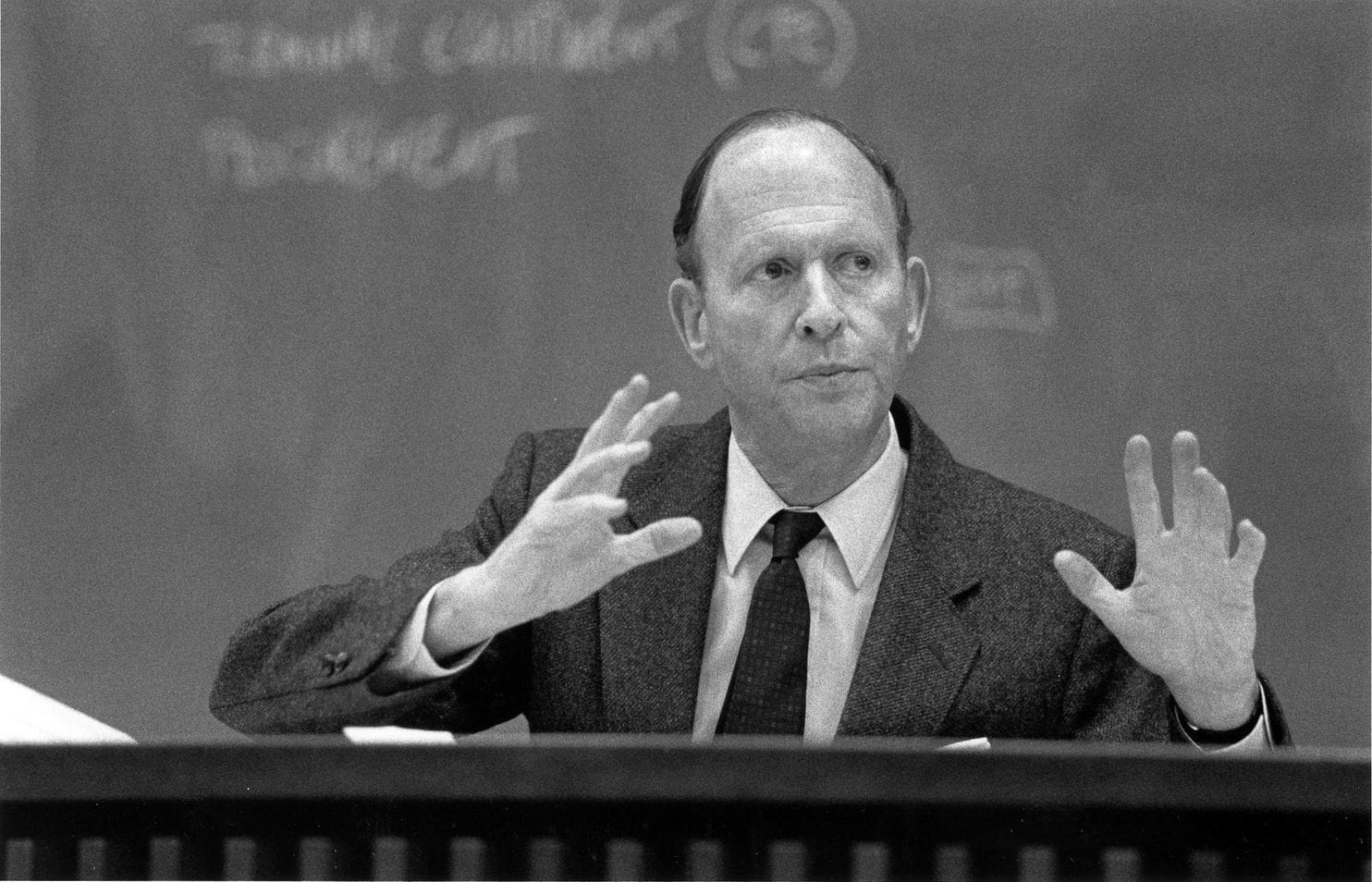 Emily Langer, washingtonpost.com
JB personal note: I grew up in Rome as a foreign service brat, '58-'62 and can still swear in Romanesco.
On my remarkable diplomat father, see.

Image from article: Dr. Gardner taught at Columbia Law School for nearly six decades before his retirement in 2012. (Gary Gilbert/Courtesy of Columbia Law School)
Richard N. Gardner, who helped mold U.S. foreign policy and generations of policymakers as a Columbia Law School professor for nearly six decades and as a U.S. ambassador to Italy and Spain, died Feb. 16 at his home in New York City. He was 91.
The cause was congestive heart failure, said his daughter, Nina Gardner.
Dr. Gardner spent more than half a century moving between academia and government, training the legal and economic expertise that he gained as a Yale law student and Rhodes scholar on some of the most pressing global concerns of the Cold War and its aftermath.
At Columbia, he was best known for his seminar “Legal Aspects of U.S. Foreign Economic Policy,” which he taught from 1955 until his retirement in 2012. Enrollment was famously competitive, and Dr. Gardner invited those admitted to complete notecards with their contact information and career aspirations.
He called upon those notecards years later to recommend his former students for influential posts in government and beyond, building what the Chronicle of Higher Education once described as “a global network of lawyers, diplomats, business leaders and policy makers.”
Dr. Gardner held a series of his own influential government posts beginning in the 1960s, when he served under Presidents John F. Kennedy and Lyndon B. Johnson as deputy assistant secretary of state for international organization affairs. He later served as ambassador to Italy from 1977 to 1981, under President Jimmy Carter, and as ambassador to Spain from 1993 to 1997, under President Bill Clinton.

Image from article: Dr. Gardner, shown here at far left with President Kennedy at far right, was later U.S. ambassador to Italy and Spain. (Courtesy of Columbia Law School)
He was a forceful proponent of international institutions including the United Nations and their role in addressing such problems as environmental degradation — an area where he was credited with sounding a prescient alarm.
“We are finally beginning to recognize that how a nation deals with its national environment is no longer its own and nobody else’s business,” he wrote in a New York Times commentary in 1970. “We are beginning to comprehend the unity of the world’s ecological system, which means that all nations may be affected by how any one of them treats its air, water and land.”
He faced perhaps his most challenging government assignment as ambassador to Italy, at a time when the Communist Party seemed ascendant and when the country was in the throes of the violence sponsored by the leftist Red Brigades.
In the past, the United States had sought to influence Italian elections through CIA activity, according to journalist Tim Weiner’s book “Legacy of Ashes: The History of the CIA.” Dr. Gardner said that as ambassador he vowed to honor Carter’s inaugural promise that “we will not behave in foreign places so as to violate our rules and standards here at home.”
“I took that very seriously,” Dr. Gardner recalled in remarks before the Council on Foreign Relations in 2005. “I said, we are going to combat the communists, but using public diplomacy [JB emphasis] . . . . There are going to be no dirty tricks.”
He invited to the U.S. Embassy Italian cultural figures including filmmaker Federico Fellini and writers Leonardo Sciascia and Alberto Moravia, who he said had been previously omitted from official guest lists because of their leftists politics. The Times described him as the “first American ambassador to Italy to make formal approaches to the Communist Party.”
Writing in the Times in 1983, he recalled engaging in “much table pounding in Washington” to obtain funds to train Italian teachers of English and English-speaking teachers of Italian.
He also sought to increase the number of American texts available to Italian readers, noting ruefully that when he requested an Italian translation of the Federalist Papers, he learned they had been out of print in Italian for years. The works of Marx , Lenin and Stalin, however, were widely available.
He was credited with helping persuade Italy to become the first European country to accept U.S. cruise missiles on its land, an important achievement at the time. But “we seem to have forgotten the obvious truth that you don’t defend national security with arms alone,” he wrote in the Times commentary. “The Soviet SS-20 missile is a threat to European security, but just as great a threat is the slow and steady erosion of common values and interests that is the foundation of the Atlantic alliance.”
Richard Newton Gardner was born in New York City on July 9, 1927. His father was a lawyer, and his mother was a homemaker.
After stateside Army service during World War II, Dr. Gardner received a bachelor’s degree in economics from Harvard University in 1948. He was a 1951 graduate of Yale Law School and received a PhD in economics from the University of Oxford in 1954.
His books included “Sterling-Dollar Diplomacy: The Origins and the Prospects of Our International Economic Order” (1956), “In Pursuit of World Order: U.S. Foreign Policy and International Organizations” (1964), and a memoir, “Mission Italy: On the Front Lines of the Cold War” (2005).

image (not from article) from
Dr. Gardner advised two Democratic presidential candidates, Clinton in 1992 and Al Gore in 1998, on foreign policy during their White House campaigns. As ambassador to Spain during the Clinton administration, he sought to defend intellectual property rights for U.S. software makers and to boost sales of U.S. helicopters.
His wife of 51 years, the former Danielle Luzzatto, died in 2008. Survivors include two children, Nina Gardner of Washington and Anthony Gardner, who served under President Barack Obama as U.S. ambassador to the European Union, of London; and three grandchildren.
His wife, whose family, like Dr. Gardner’s, was of Jewish heritage, was born in Italy and fled to the United States after the promulgation of the 1938 anti-Semitic racial laws under fascist dictator Benito Mussolini.
Dr. Gardner credited her as a co-ambassador, especially during their time in Italy. She once came home from the hairdresser and reported that she had heard from the mistress of “Minister X” that the minister was going to resign — “and it was an important minister,” Dr. Gardner joked before the Council on Foreign Relations.
He informed his colleagues in the CIA, who did not believe the report, until the minister stepped down that Friday. The following Monday, his colleagues demanded to know where he had gotten his tip. “I took great joy,” he recalled, “in saying to the CIA, ‘I never disclose sources.’ ”
Original Article