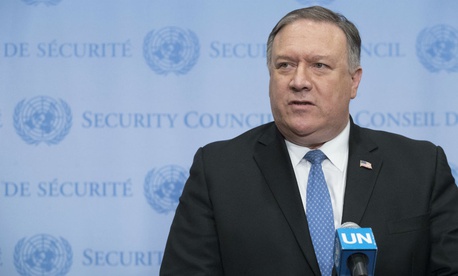 Image from article, with caption: Secretary of State Mike Pompeo speaks to the press at United Nations headquarters earlier in December.
President Trump surprised many with his Dec. 7 nomination of State Department spokeswoman and Fox News alumnae Heather Nauert to be his United Nations ambassador.
Most observers agree there will be spirited debate over her qualifications for a job once held by Henry Cabot Lodge, Adlai Stephenson, Daniel Patrick Moynihan and Madeleine Albright.
But fewer noted also that her departure leaves a new vacancy in her current post, officially titled acting undersecretary for public diplomacy and public affairs. [JB emphasis; see also (1)] That only adds to the holes in the structural roster of key officials at State, a challenge traced to an early reluctance to rush nominations by both President Trump and former Secretary of State Rex Tillerson.
And though Mike Pompeo has made it his priority to flesh out the upper-tier team since he was sworn in as secretary last April, the latest head counts by outside groups show that Pompeo, the White House and the senators who must approve confirmations have a ways to go to catch up.
About 51 percent of State’s 198 key positions had been filled as of Monday, according to the ongoing tally by The Washington Post and the nonprofit Partnership for Public Service. That puts State at a rank of 11th among the 16 Cabinet-level departments in filling vacancies
Of State’s 198 key slots, 101 have a person in place, 65 are awaiting Senate confirmation and 29 have no nominee, the Partnership told Government Executive. The remainder have been announced but not yet received in the Senate.
At the State Department's sister organization, the U.S. Agency for International Development, only two of 11 key positions are occupied, with five nominees awaiting confirmation, and four slots with no nominee.
Pompeo is also facing substantial attrition under Trump. Between July 2017 and June 2018, the Partnership found, 722 full-time, non-seasonal employees left—about 6.96 percent of the department’s total, and the fourth-highest rate among major agencies.
At USAID, 205 such employees departed during that one-year period, or 6.77 percent of its total full-time workforce.
According to State’s website, the high-level vacancies include the deputy secretary of State for management and resources (though Deputy Secretary of State John Sullivan is doing the job), as well as the undersecretary for civilian security, democracy and human rights. Acting officials are working as the undersecretaries for economic growth, energy and the environment and as undersecretary for management.
Among 100-plus assistant secretaries and special representatives, there are 32 vacancies, including chief of staff, chief economist, special representative for global food security and cyber-issue coordinator, and special representative to the U.N. Human Rights Council.
Neither the White House nor Pompeo has nominated a chief financial officer; an assistant secretary for oceans and international, environmental and scientific affairs; or a coordinator for threat reduction programs, according to the Partnership. Nor are there nominees for ambassadors at large to address HIV/AIDS or war crimes, and no special envoys for global women’s rights or North Korea human rights issues.
Among ambassadors, the tally of 188 positions tracked by the American Foreign Service Association shows 28 vacancies with no nominations, including those for Mexico, Pakistan, Turkey, Egypt, Jordan and Panama. Fifty-four names have been nominated.
Asked for a response by Government Executive, State Department Deputy Spokesperson Robert Palladino said: “From Day 1, Secretary Pompeo has made staffing the State Department a top priority. The secretary remains committed to putting a full team on the field to advance American foreign policy and looks forward to welcoming his fourth incoming class of Foreign Service officers in January. There are also 71 highly-qualified State Department nominees currently awaiting confirmation – 39 pending a vote—and we are hopeful the Senate will vote this week to move the nominations forward.”
Retired Ambassador Ronald Neumann, president of the Academy of Diplomacy, said, “The pace of ambassadorial appointments has picked up under Pompeo, and we are seeing an effort by the Senate to push out confirmations” that may bear fruit this week. “The big problem now is the standoff over State appointees, not ambassadors,” he added. He credits Pompeo for installing a counselor to the department, Ulrich Brechbuhl, but notes that Pompeo’s choice of his West Point classmate Brian Bulatao has been held up by senatorial politics over release of documents. Trump has also moved forward to nominate David Schenker to be assistant secretary of State for Near Eastern affairs.
The most important vacancy, Neumann said, is the undersecretary of state for management (from which nominee Eric Ueland withdrew), which plays a key role in budgeting, from overseas buildings to information technology.
Another challenge for Pompeo, Neumann added, is the “unwillingness across this administration to nominate senior career officials,” both in the civilian and foreign services, whose stature goes back more than 100 years.
Across the government, according to the Post-Partnership tracker, Trump has offered no nominee for 123 out of 706 key positions.
A similar tracker using different measures is compiled by the White House Transition Project out of the University of North Carolina-Chapel Hill. As of Oct. 22, the Trump administration on nominations has “the worst performance since transition records were kept (beginning with the reformed appointments process in 1978). The Trump administration has slipped two more months to now eight months behind the typical presidential administration,” the academic analysts wrote. “On confirmations (and hence on filling policy leadership positions), the Trump administration remains around 10 months behind previous administrations.”
Original Article