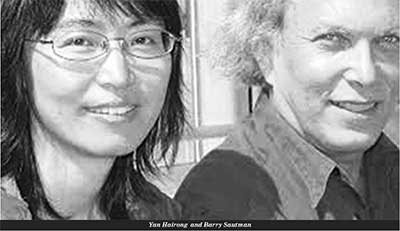 Public diplomacy [JB emphasis] not China’s strong point ..
Two Hong Kong based academics, Professor Barry Sautman of the Hong Kong University of Science and Technology and Prof. Yan Hairong from the Hong Kong Polytechnic University were in Sri Lanka last week on a case study of Sri Lanka as a prime example of a country caught in a ‘Chinese debt trap’. …
Q. Why is it that there has not been a concerted effort on the part of the Chinese government to answer … allegations of a Chinese debt trap not just with regard to Sri Lanka but to other countries such as Zambia as well? Here they did make some effort in that direction because the Chinese embassy called some journalists and told them that the proportion of Chinese loans in Sri Lanka’s loan portfolio was quite low and that other countries had a much greater shares of Sri Lanka’s external debt.
A. Frankly speaking, the Chinese government does not know how to do public diplomacy. They will issue statements … which will automatically be discounted as propaganda. However if some story appears in the New York Times, it will be assumed to be objective and not to have a political slant. Though the Chinese government has experienced some improvement in this regard, it is still a long way away from effectively dealing with criticism. …