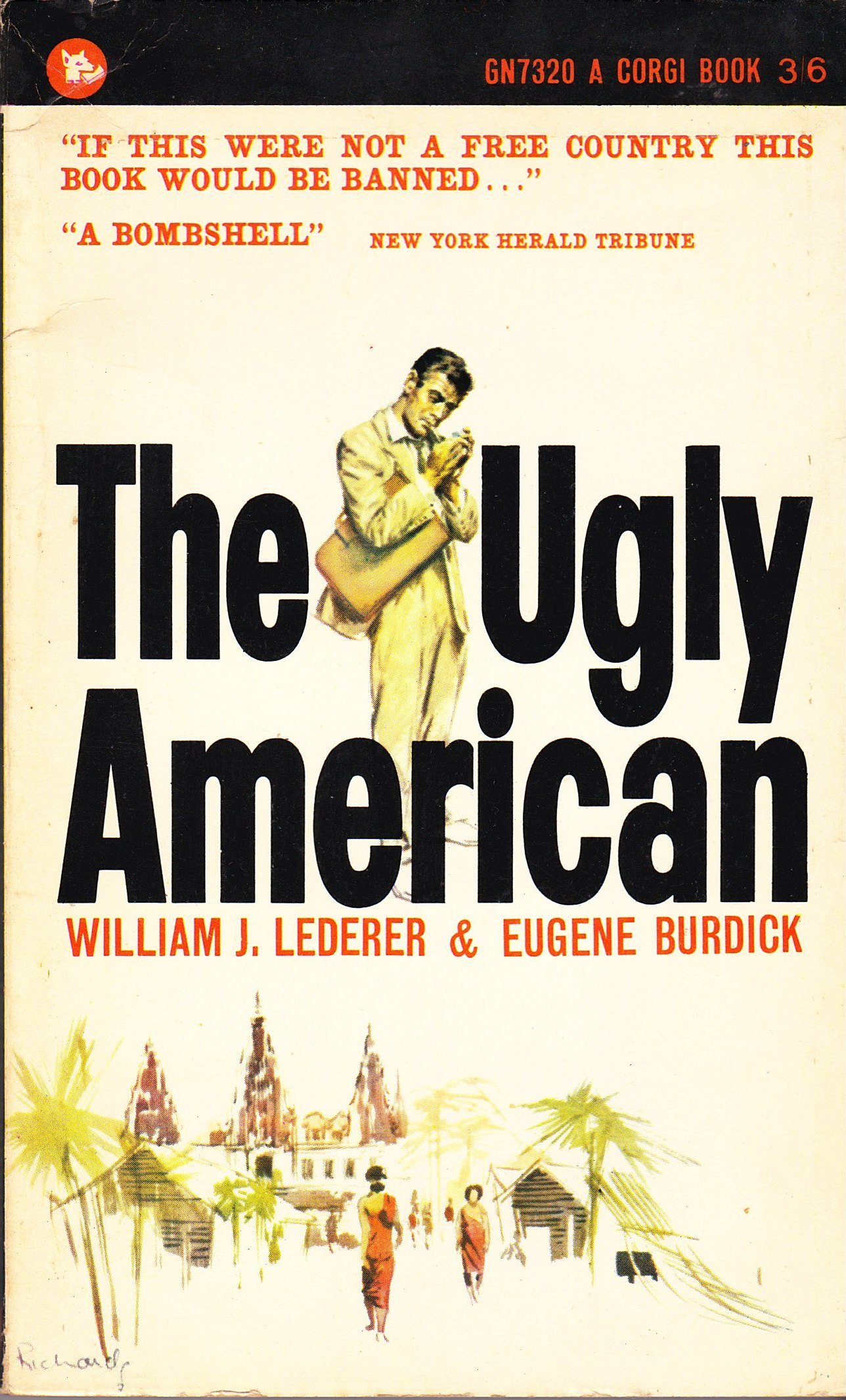 image from
In 1958, William Lederer and Eugene Burdick wrote a thinly disguised novel about their country’s outrageous conduct — a dangerous mix of determined ignorance and blithe arrogance — in Southeast Asia. The book carried a title that became a catchphrase and then a damning definition. “The Ugly American,” which sold millions of copies, became shorthand for the brash, America-is-best, why-don’t-the-locals-speak-English kind of American tourist.
The writing is still highly legible today. As Michael Meyer noted in the New York Times in 2009, “the phrase is shorthand for our compatriots who wear tube tops to the Vatican or shout for Big Macs in Beijing… drunken backpackers or seniors sporting black socks.” The most recent example of ugly-American behavior on unconscious display may have been that of Miss USA Sarah Rose Summers at the Miss Universe competition last month, when she expressed her concern or regret or sympathy — or something — that another contestant did not speak her language. “Could you imagine? Miss Cambodia is here and doesn’t speak any English, and not a single other person speaks her language… Poor Cambodia.”
But as Meyer’s reconsideration of the novel, half a century after its first publication, notes: “The Ugly American” was not actually about “impolitic travelers” or about them alone but rather “the so-called educated elite of the [American] diplomatic corps, whose insensitivity to local language and customs” undermines the very objectives of American public diplomacy or empire-making [JB emphasis]. To borrow the introductory language of the Ugly American Book Club (yes, there is such a thing): “its title remains a catch-phrase for incompetent and insensitive U.S. diplomats, arrogant entrepreneurs, and even travelers and tourists from the States who act badly abroad.”
In the last few years, the position of diplomats, entrepreneurs and travelers acting badly abroad has been claimed by a new superpower: China. While the controversial behavior of some Chinese tourists have become fodder for social media, it must be said that the paradigm of the Ugly Chinese was set by Chinese officials themselves.
At the Asia-Pacific Economic Cooperation summit in Papua New Guinea last November, China wanted to ensure that the closing communiqué would not contain language adverse to itself—to the point where four Chinese officials broke protocol by “barging” into the Papua New Guinea foreign minister’s office in an unsuccessful attempt to do just that. Security had to be called into the office to eject the Chinese.
It was not the only display of Chinese overreach at the Apec summit; after the prime minister of Papua New Guinea invited journalists to cover his bilateral meeting with Chinese President Xi Jinping, in his own country, Chinese officials blocked access to the media.
Only the same dangerous combination of deliberate ignorance and blithe arrogance can explain why China inveigled Ecuador into building a major dam near an active volcano, in an earthquake-prone zone. As Nicholas Casey and Clifford Krauss report in the Times: “Now, only two years after opening, thousands of cracks are splintering the dam’s machinery. Its reservoir is clogged with silt, sand and trees… This giant dam in the jungle… has become part of a national scandal engulfing the country in corruption, perilous amounts of debt — and a future tethered to China.”
How much debt? Together with other infrastructure projects, some $19 billion, all told. It is easy to multiply the number of examples of aggressive Chinese objective-setting and debt-ensnaring at the expense of host countries: airports in Sri Lanka and Zambia, ports in Kenya and Djibouti. The list goes on. And the Philippines?
Well, where do we start? Perhaps with the growing number of Chinese nationals entering the country to work here — the subject of a Senate investigation launched by Sen. Joel Villanueva. “We strongly believe there is a dire need to strengthen legislation and enforcement,” Villanueva said, “to stop illegal online gambling and proliferation of illegal Chinese workers that shamelessly robbed our own people of jobs.”
There is broad public support in the Philippines for initiatives like these; Filipinos want to hold the new bully to account — while we still can, while the country is still ours to run.
On Twitter: @jnery_newsstand. E-mail: jnery@inquirer.com.ph
Original Article