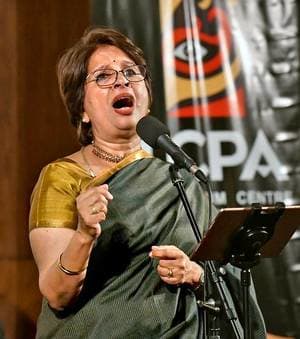 Nirupama Menon Rao image from article
Throughout their four-decade-long diplomatic career, former Foreign Secretary Nirupama Menon Rao has strived to bring people closer to each other. Post-retirement, the former diplomat has chosen to take forward her mission by engaging in public diplomacy [JB emphasis] through music.
Ms. Rao, who co-founded the South Asian Symphony Foundation (SASF), has been pursuing her passion for music and has already released an album. She was the cynosure of all eyes as she led a Western classical concert ‘Gitanjali: An offering of song’ in the city on Saturday. She was joined by Sri Lankan musicians Soundarie David Rodrigo and Neranjan de Silva on the piano and keyboard. The programme was organised by Trivandrum Centre for Performing Arts in collaboration with SASF. Shashi Tharoor, MP, was the guest of honour. Speaking in conversation with former diplomat T.P. Sreenivasan, Ms. Rao said her endeavour was to bring together musicians of eight South Asian countries.
She claims to have derived inspiration from the West-Eastern Divan Orchestra, founded by Israeli conductor Daniel Barenboim and Palestinian scholar Edward Said, which is credited with having brought together Arab and Israeli musicians. Ms. Rao looks forward to the concert that the South Asian Symphony Orchestra will organsie at the National Centre for the Performing Arts in Mumbai on April 26.
Original Article