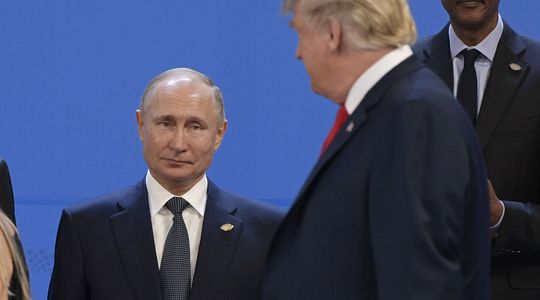 Deirdre Shesgreen, USA TODAY
WASHINGTON – The Trump administration will tap a former Fox News reporter and former intelligence operative to lead the U.S. government's premier agency charged with exposing and countering disinformation from Russia and other foreign governments around the world.Lea Gabrielle, who joined Fox News in 2013 and is also a former Navy pilot, will be the new head of the Global Engagement Center, according to a copy of the announcement obtained by USA TODAY. State Department spokesman Robert Palladino later confirmed the appointment at a briefing on Thursday, saying Gabrielle will begin her new position Feb. 11. Gabrielle is the latest in a string of Fox News personalities to win high-profile roles in the Trump administration. The president has selected Heather Nauert, a former Fox News anchor, to be his next United Nations ambassador. And he hired former Fox News executive Bill Shine in June to serve as a top communications adviser.
Gabrielle's appointment, first reported by Foreign Policy magazine, immediately raised eyebrows among Trump administration critics who questioned her qualifications for the job. Gabrielle confirmed her new post in an interview with the magazine and said China, Russia, Iran and terrorist organizations posed the top propaganda threats to the U.S.“We have to realize that we are under attack by adversary countries and international terrorist organizations that are using propaganda and disinformation as a weapon,” she told Foreign Policy. “They’re doing it because it’s cheap, and it’s easy, and because they can.”Brett Bruen, who worked on the U.S. response to Russian propaganda in the Obama administration, said he was concerned Gabrielle did not appear to have the necessary experience for the job."Lea may be a great reporter and pilot. She has evidenced absolutely no knowledge of or experience with information warfare," Bruen said. "We need leadership that can take on this danger from day one."

President Donald Trump, looks at Russia's President Vladimir Putin as they prepare for a group photo, during the G-20 Leaders' Summit in Buenos Aires, on Nov. 30, 2018. (Photo: Juan Mabromata, AFP/Getty Images)
The Global Engagement Center became the U.S. government's disinformation hub after the 2016 presidential election – in which Russia spent millions of dollars on a covert campaign to sway the outcome and boost then-candidate Donald Trump. An acting coordinator, Daniel Kimmage – an expert on disinformation who is fluent in Russian and Arabic – has led the agency for more than two years.Under President Barack Obama, the center's chief was Michael D. Lumpkin, an ex-Navy SEAL who had previously served as an assistant secretary at the Department of Defense and a senior official at the Department of Veterans Affairs, among other positions.Bruen and others say the Trump administration has failed to prioritize the center's mission, leaving the U.S. dramatically outgunned in an era of weaponized information that is often designed to undermine U.S. national security and democracy. Although Congress authorized $60 million in funding for the agency in 2016, that funding was delayed amid two years of bureaucratic red tape and stonewalling. The center finally received its funding just as the 2019 fiscal year was closing. It now faces another possible crunch as the White House and Congress negotiate over new funding bill to keep the government open after Feb. 15, when current money will run out. "Lea will provide the permanent leadership we have needed to bolster the Global Engagement Center’s operations," Palladino said. He touted her work as a former intelligence operative and fighter pilot, as well as her familiarity with the media, as key qualifications for leading the center's work countering disinformation. "Lea was a CIA-trained human intelligence operations officer assigned to the Defense Intelligence Agency," Palladino said, adding that she has directed clandestine intelligence operations and also served in the U.S. Navy's sensitive intelligence program. "She began her public service in the Navy as a fighter pilot flying combat missions in Afghanistan and Iraq," he said.
View image on Twitter