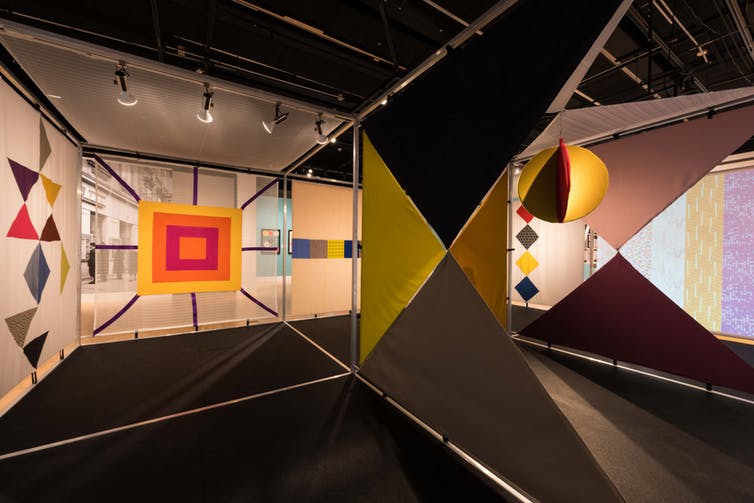 Margaret Re, theconversation.com
The look, feel and functionality of the modern American office can be traced back to the work of one woman.Florence Knoll Bassett, whom Architectural Record called the “single most powerful figure in modern design,” died at 101 on Jan. 25.In the early 20th century, offices consisted of rows of dark, heavy desks and chairs, with the executive desk angled toward an office door.Knoll, who believed that a building’s interior was as important as its exterior, introduced an office aesthetic based on function. She interviewed people about how they did their job so they could do it efficiently and comfortably. She then went on to design products like the Model 1500 series – a desk that allowed drawers and cabinets to be added to the frame based on need.The press coined a term for her “humanist interpretation of European modernism”: the “Knoll Look.” Her clients included CBS, Connecticut General, Alcoa and the University of Michigan, and you’ll see her influence in mid-century period pieces like “Mad Men.”The U.S. State Department had also noticed Knoll’s growing reputation. As part of a Cold War propaganda effort to align consumer choice with political choice, they used her and her “look” to help establish and promote an American identity abroad.

Knoll attended the Cranbrook Academy of Art, a school that’s considered the birthplace of American modernism, where she was a classmate of future star designers Charles and Ray Eames, Eero Saarinen, Harry Bertoia and Benjamin Baldwin.She eventually moved to New York, where she joined the architectural firm of Harrison & Abromovitz in 1941. While living and working in New York, she met Hans Knoll, the owner of a small furniture company, and she joined his firm in 1943. The couple married in 1946; that same year, the H. G. Knoll Company was renamed “Knoll Associates,” and the Knoll Planning Unit, which focused on interior design, was set up. Florence was named head.“I am not a decorator,” she famously declared in a 1964 New York Times article that credited her for revolutionizing office design as an architect in a predominantly male profession.Frustrated by the challenge of finding fabrics suitable for use on modern furniture, Knoll initially used men’s suiting fabrics for upholstery and interiors.Then, in 1947, Knoll Textiles, which worked closely with the Planning Unit, was launched, giving Knoll the opportunity to develop, market and sell printed and woven textiles.“Textiles were among the most visible and industrially innovative products produced in the U.S. in the 1950s and impacted many aspects of postwar life,” Berry College historian Virginia Troy told me in an interview.Wartime rationing, which included clothing and textiles, had ended in 1946. As the economy grew, so did the appetite for textiles. Used for upholstery, curtains and carpeting, they were integral to modern architecture: They could unify open floor plans, serve as dividers and separate work areas from living spaces.Knoll’s unobtrusive textile designs – which tended to feature subtle colors – often included geometric or biomorphic prints and woven fabrics in which vertical and horizontal weaves formed a pattern.Her textiles were quite different from the brocade and chintz cabbage roses sold in most of the era’s textile showrooms.

Around this time, the U.S. government started sponsoring international expositions to introduce the American people and their innovations abroad – what historian Robert Haddow called “Pavilions of Plenty.”The most famous is probably the 1959 American National Exhibition in Moscow, during which then-Vice President Richard Nixon and Soviet Premier Nikita Khrushchev held their “kitchen debate” and argued about the merits of capitalism and communism.But there were smaller exhibits that preceded the American National Exhibition in Moscow including “How America Lives,” which was held in Frankfurt in 1949, and “America at Home,” an exhibition in Berlin that took place in 1950.In 1951, the Traveling Exhibition Service – now called the Smithsonian Institution Traveling Exhibition Service – asked Knoll to curate and design an exhibit. She had been recommended by Edgar Kaufmann Jr., the director of the Museum of Modern Art’s Good Design program. It also didn’t hurt that Knoll was known in some government circles. She had designed Secretary of War Henry Stimson’s office, and Knoll Associates had outfitted government buildings in the U.S. and Europe.Titled “Contemporary American Textiles,” Knoll and the Planning Unit designed an exhibit that, like her office designs, was meant to be experienced as a whole. The self-lit aluminum-framed pavilion included its own drop-in floor, and double-sided wall panels assembled from textiles were hung by straps and braced by cross-wires.For a 2018 exhibit titled “A Designed Life,” organized by UMBC’s Center for Art, Design & Visual Culture, I recreated Knoll’s original exhibit using photographs and plans from the Archives of American Art.

For the 2018 exhibit ‘A Designed Life,’ the author rebuilt Knoll’s ‘Contemporary American Textiles.’ Dan Meyers, Author provided
Brightly colored panels were used to make rooms within a room. Sight lines formed by triangular shapes and patterns directed visitors through the exhibit, offering a continuously changing viewpoint described by the magazine Interiors as “kaleidoscopic.”The display showcased over 150 well-designed, mass-produced and readily available fabrics; in the forward of the accompanying catalog, Knoll described the textiles as “designs of beautiful color in all price ranges.” Over 50 of these fabrics were sold under the Knoll Textile label.

The recreated Knoll exhibition allows visitors to participate in the original ‘kaleidoscopic’ experience. Dan Meyers, Author provided
The goal was to sell the idea of capitalism, America and democracy in a post-war Europe that was anxious to rebuild, and it appeared in West German and Austrian schools, museums and trade fairs.Government records note that the exhibit was included in the 1952 Berlin Cultural Festival and presented in 1953 in Munich and Essen. The U.S. Embassy in France also sponsored its display in a 1954 Parisian trade show dedicated to household management.To date, there’s no known physical trace of this exhibit.Was it thrown away or donated to a German school or museum in order to earn some goodwill? Was it discarded because the 1948 Smith-Mundt Act, which authorized international public diplomacy [JB emphasis] , discouraged the presentation of these exhibitions back in the United States?I have no way of knowing.I do know, however, that Knoll was proud of this exhibit: When German architect Walter Gropius praised it, she wrote that it was “a great honor.” And she included sketches, plans and photographs of “Contemporary American Textiles” in her papers that she donated to the Archives of American Art.The exhibit is a reminder that one of the country’s most influential designers was also one of its great ambassadors.
Margaret Re