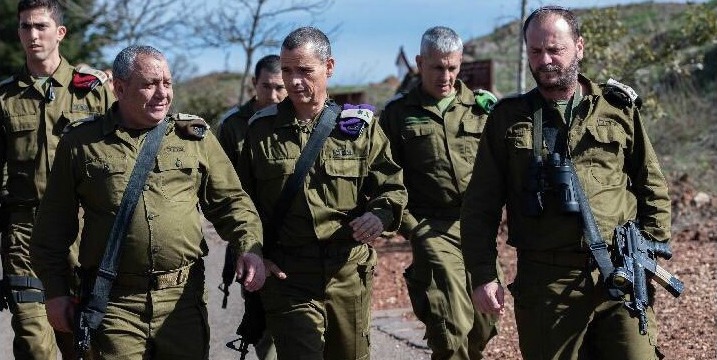 Image from article: IDF Chief of Staff Lt. Gen. Gadi Eizenkot (front left) visits Israel’s border with Syria in the Golan Heights, Nov. 20, 2018. Photo: IDF Twitter account.
JNS.org – Donald Trump’s decision to withdraw ‎American troops from Syria shocked many in the ‎United States and the Middle East.
In Israel, ‎most of the public discourse about this decision revolves around the ‎challenges of this process, but we seem to be ‎largely ignoring the question of what opportunities ‎it may present: For one, could Israel, as ‎compensation, secure a pledge from Washington to ‎help it in times of war and on other vital ‎diplomatic issues?‎
Given the recent discovery of Hezbollah’s grid of ‎terror tunnels and Iran’s attempts to upgrade its ‎offensive capabilities, it is reasonable to assume ‎that Israel is closer than it has ever been in the ‎last decade to a war in the northern sector. This could prove highly complex from a ‎military standpoint and even a legal-diplomatic one: Most of Hezbollah’s arsenal of 130,000 projectiles is hidden under civilian homes. ‎Neutralizing them would require investing ‎considerable military resources and likely ‎entail large civilian losses.‎
It is important to remember that in the last four ‎military campaigns since 2006, Israel has had to ask ‎the United States for additional ammunition, and we ‎would probably have to do the same in a future war. ‎Israel would also likely need diplomatic and legal ‎backing to defend it against condemnations in ‎the UN Security Council and the International ‎Criminal Court.‎
The same opportunity exists regarding the situation ‎opposite Hamas in the Gaza Strip: Israel can win ‎a US commitment for the post-Hamas era ‎there. Naturally, the IDF is capable of removing ‎Hamas from the Gaza Strip on its own, but the ‎question is who would take its place. ‎Understandings could be reached with the ‎United States — and through it, the Sunni world — on Gaza’s rehabilitation and the ‎establishment of an economic infrastructure for the civilian population there.‎
As Israel prepares for military campaigns in its ‎north and south, as part of my position as ‎deputy minister for public diplomacy [JB emphasis] at the Prime ‎Minister’s Office I am promoting a first-of-its-kind initiative to develop the Golan Heights. ‎

images (not from article) from
The goal is to have more than 100,000 Israelis move ‎to the area over the next decade, thereby increasing ‎the Israeli population there by five times, and to ‎establish the necessary industrial and ‎transportation infrastructure for such a move.‎ My efforts have already gained widespread ‎support domestically and internationally.
Now, ‎given the fragile situation in Syria, Israel must ‎reach a comprehensive understanding with the US on ‎recognizing Israeli sovereignty over the Golan ‎Heights. This would send a message to our ‎enemies about the decisive American position on the eternal Israeli ownership of the Golan ‎Heights.‎ It would be a good idea to make a large portion of ‎these commitments public in multiple languages. Such ‎a move would bolster America’s somewhat bruised ‎image in the Middle East, and even reinforce its ‎ability to promote diplomatic processes and its ‎position as a very effective mediator in possible ‎peace negotiations. ‎
It is no secret that during the Obama ‎administration, the United States lost some of its status ‎in the region. The Trump administration has taken ‎several steps — from striking Syrian assets in ‎response to Syrian President Bashar Assad’s use ‎of chemical weapons to pulling out of the 2015 ‎nuclear deal with Iran — to improve this situation. ‎A commitment to aid Israel would be a continuation ‎of this policy of improvement, presenting multiple ‎possibilities not only for Israel but also for the ‎Trump administration. ‎
The recent changes in the region present a one-time ‎opportunity for Israel, and we should take advantage ‎of it.‎
Michael Oren is a former Israeli ambassador to the United States. He currently serves as deputy public diplomacy minister.
Original Article