An Ambassador’s View: Students from Saudi Arabia in the U.S. 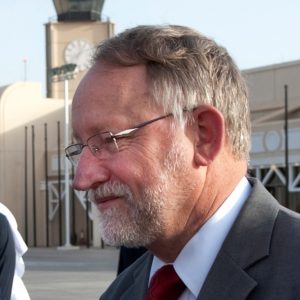 Donald M. Bishop, publicdiplomacycouncil.org, February 6, 2019
Former U.S. ambassador to Saudi Arabia James B. Smith – he served in Riyadh from 2009 to 2013 — was interviewed by Checkpoints, the alumni magazine of the U.S. Air Force Academy, his alma mater. The interview was conducted long before the current debate – occasioned by the killing of journalist Jamal Khashoggi — over the future of the relationship between Saudi Arabia and the United States, but Public Diplomacy [JB emphasis] practitioners and students will find many of his comments of interest. For an updated view of how many students from Saudi Arabia are studying in the U.S., refer to the fact sheet in the Open Doors 2018 report. Here are the portions of the interview on Saudis studying in the United States.
Checkpoints: What is the average Saudi’s perception of American culture? Is there a distinction made between foreign policy and the culture itself?

U.S. Ambassador to Saudi Arabia James Smith in Riyadh, Saudi Arabia on Feb. 20, 2011. (Department of Defense photo by Mass Communication Specialist 1st Class Chad J. McNeeley).
Ambassador Smith: Saudis have an innate ability to separate America and Americans from U.S. policy. They have a really interesting capacity to compartmentalize. Sometimes you would meet somebody and he’s really upset about U.S. policy on Palestine or Syria or Iran, you name it; then he’ll break and tell you about that wonderful time he had at Colorado State University and those amazing four years, the people he stays in touch with, that he goes back on vacation and he’s planning on his kids to go to university in the states – and he’ll do it all in the same breath.There have been different periods when there has been a spike in Saudi students coming to the United States. For the most part they will tell you that they really treasured their time in the United States. They really see America as a second home. We’re a country that welcomes people and wants you to be a part of the community when you get here.They have a great fondness for the country and Americans. This is separate from issues they have with our foreign policy at times. We have worked very hard to ease the visa process so that Saudis could travel back and forth – it’s good for our economy as well as being good for them.

Saudi students learn about educational opportunities in America at the U.S. Embassy (EducationUSA).They treasure the American education system, because their education system is really based on rote memory. When you come here for your undergraduate education you’re immersed in critical analysis. They know individually, and the government knows, that you have to have that critical thinking ability if you’re going to be successful in business. If the bureaucracy is going to be successful over the long term you have to challenge conventional thinking. You don’t get that element in their system. There is a reason why they come to the States for university education. Many of them go on to get master’s degrees and doctorates and they are going back to fill slots in the new universities in Saudi Arabia.* * * * *When I got there, there were 18,000 Saudi students studying in the United States. If you want to make an impact on the relationship, both the bilateral relationship and the people-to-people relationship, you start with the students. We went from 18,000 to 80,000 in four years. We also brought in a lot of American companies and universities to help with the health care development in the country.* * * * *As a caveat, in my time there I was advocating a broadening of the student exchange program to allow more American students to come and study for a semester abroad. They had not allowed that in the past. There are student visits, but not exchanged students.
Source: “Four Years in the Kingdom,” Checkpoints, March 2014, pp. 32-36 (subscribers only).