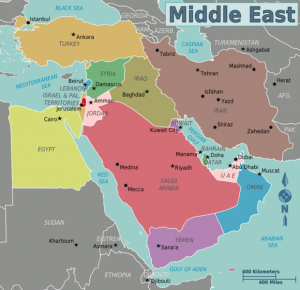 Great Decisions is designed to stimulate discussion across the U.S. of citizens interested in current global issues.In a Great Decisions essay written late last year, the Columbia University scholar characterized the Middle East bluntly:“It remains a region in turmoil. A century after the map of the region was decided by colonial powers, states that never achieved coherence or legitimacy are failing.“There is a crisis in leadership, with autocrats condemned for incompetence, corruption and greed. The future of borders and the nation state itself has been increasingly called into question as non-state actors such as the Islamic State (ISIS) and Al Qaeda carve out roles for themselves.“Hope for democracy and change had been high as popular uprisings broke out in the Arab spring revolts of 2011. Although the leadership was overturned in Tunisia, Libya, Egypt and Yemen, these uprisings failed. Since then,” Professor Potter added, “there has been a feeling of hopelessness and apprehension throughout the region.”

Some Recent Breakthroughs, Large and Small

News reports say that ISIS, an Islamic terror group which in 2016 had seized an area in Iraq and Syria equivalent to the size of Britain, this February been reduced to a single square mile of territory in Baghouz, a town close to the Iraqi border in eastern Syria. A Kurdish-led ground offensive, backed by U.S. air strikes and opposition coalition forces is credited with destroying what was left of the ISIS so-called caliphate.The Washington Post’s Louisa Lovelick reported on February 19 that this coalition had reduced the ISIS caliphate to the tiny town of Baghouz. An emergency al-Hol refugee camp was set up nearby to accommodate fleeing families.A dozen of those running for their lives were interviewed by Western reporters at the camp, which overnight had grown so large it extended to the horizon. Yazidi women and their families who had been enslaved by the ISIS militants, were in shock. One said she had walked “out of hell.”“The militant group’s most die hard survivors,” according to reporter Lovelick, “viewed surrender as a betrayal. But as the final battle loomed,” she added, “others chose survival, laying down their guns and skulking out among fleeing civilians or using middlemen to negotiate their surrender.”

A Victory for the West, and Significantly, for the Kurds

Kurdish YPG fighters, mainly-Kurdish militia in Syria.For decades, the 22 million Kurds, who live in Iran, Iraq, Turkey and Syria, have dreamed of a separate state of their own. T hanks to U.S. enforcement of a no-fly zone in northern Iraq beginning in the 1990s, the Kurds developed a relatively peaceful and prosperous community there.“Across the region,” writes Henri J. Barkey of Lehigh University, “the Kurds are gaining self-confidence, pushing for long-denied rights, and, most important, collaborating with each other across national boundaries in the Middle East and throughout the diaspora.” In the current edition of Foreign Affairs, Professor Barkey adds: “To a greater extent than at any previous point in history, Kurds in the four traditionally distinct parts of Kurdistan — Iran, Iraq, Syria and Turkey — are starting down the road of becoming a single Kurdish nation.”

Moving Close to a Ceasefire in the Yemen Civil War

A critical turning point to end the fighting in Yemen, termed the world’s worst humanitarian disaster by the United Nations, may occur soon. U.N. envoy Martin Griffiths told the U.N. Security Council this week that a redeployment of allied Saudi and UAE ground forces and opposing Iranian-backed Houthis in the vital port city of Hodeidah may at last be possible.The four-year-long conflict has cost thousands of lives, and Hodeidah on Yemen’s Red Sea Coast has been occupied by the Houthis who have blocked imports there for several years. That has resulted in the cessation of food and medicines for well more than 10 million Yemeni civilians threatened with starvation and disease.Units of the two sides (Saudi Arabia and the United Arab Emirates on one side, and the Iran-backed Houthis on the other) must first reach a permanent ceasefire under U.N. auspices. The Hodeidah port is vital so that a flow of relief food and supplies can finally arrive and be distributed throughout Yemen. That war-torn country, the poorest in the Arab world, must confront the dangers of more than a million landmines planted primarily by Houthis as the conflict has worsened.

Will the Mideast Glimmers of Hope Last?

In Yemen, everything depends on mobilizing strong U.N. support for United Nations envoy Griffiths’ efforts to build momentum for a peace settlement. The Houthis still occupy well more than half of Yemen, including its capital city Sana’a, and the Saudis show no sign of withdrawing. So a much-needed national ceasefire there appears unlikely to occur soon, given the many steps ahead and a starving, diseased, and disillusioned Yemeni population weary of war. The list of essential compromises a peace settlement would require is formidable.

What if: Syria might be stabilized after nine years of Civil War, and Turkey be persuaded by sound public diplomacy to keep hands off as U.S. and European forces scale back but remain in place until a secure peace is consolidated?What if: in Yemen, there’s a nationwide cessation of hostilities and a postwar government representing both north and south is resorted, with adequate shipments of food and medicine guaranteed for all? Along with relief efforts, public diplomacy initiatives like child education, restoring sound local governance, and community teamwork were to be designed and implemented?These are formidable challenges. They were summed up on Fareed Zakaria’s CNN interview program on February 10 by French author and intellectual Bernard Henri-Levy: “The flame of liberty is not dead. You need principles and determination to ease crises.” Tackling and ending the civil wars in Syria and Yemen offer excellent examples.

Alan HeilAs a 36-year veteran of the Voice of America (VOA), Alan Heil traveled to more than 40 countries a foreign correspondent in the Middle East, and later as director of News and Current Affairs, deputy director of programs, and deputy director of the nation’s largest publicly-funded overseas multimedia network. Today, VOA reaches more than 275 million people around the world each week via radio, television and online media. Read More
Original Article