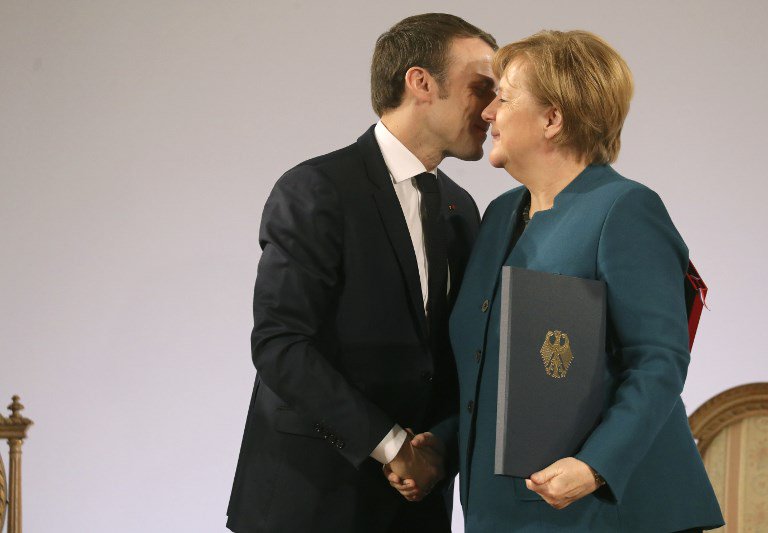 Image from article, with caption: French President Emmanuel Macron and German Chancellor Angela Merkel. (AFP)
The Treaty of Aachen signed on Jan. 22 by French President Emmanuel Macron and German Chancellor Angela Merkel has little day-to-day practical relevance — but considerable historic and political significance.
On the same day 56 years before, two titans of postwar Europe, French President Charles de Gaulle and German Chancellor Konrad Adenauer, signed the Elysee Treaty. It covered the areas of defense, education and youth relations and was designed to turn centuries of rivalry between France and Germany into peaceful coexistence. This was probably one of the most successful examples of public diplomacy [JB emphasis]. Generations of young French and German students went on exchange programs to each other’s countries. Indeed, if you now ask educated German or French citizens about their neighbors, their feelings are warm in memory of summer camps and winter excursions on either side of the border. (The feelings of British citizens of a similar generation and background about their French and German neighbors are a useful comparison; what you hear from them is mainly irony and dislike.)
Those exchange programs and other government-to-government mechanisms, provided for by the Elysee Treaty, laid the groundwork for Franco-German political cooperation in Europe. Indeed, the axis between Paris and Bonn, and later Berlin, has always been a driving force in the European Union.
It was no coincidence that the two countries decided to reinvigorate those ties. In his speech at the Sorbonne in autumn 2017, Macron advocated closer European cooperation in defense matters as well as greater currency integration. Berlin was not necessarily wholly in tune with his thoughts; nevertheless, faced with Brexit, President Trump’s “America First” policies and populist movements across the continent, they saw value in the Franco-German alliance as a bulwark of European co-operation and multilateralism.
The new treaty in itself does not achieve much more than what the EU already provides for, other than further integration of professional and industrial standards, and easing the logistics of commerce and travel between the neighboring regions of Saarland and Alsace-Lorraine.
Nevertheless, the symbolic value of the treaty is significant in the face of Brexit and other potential centrifugal forces in the European Union. The EU would be unimaginable without the driving force of Franco-German friendship and cooperation at its core. That the Treaty of Aachen does not go much further than the contractual construct of the EU provides for is significant too. For one, the EU should grow closer as a whole and not form sub-alliances. Second, the governments opted not to go down the slippery road of ever-closer integration, of which EU president Jean-Claude Juncker is the most vociferous proponent. He does the EU no favours with this idea, because it is a red rag to the bull of populist movements with secessionist tendencies — such as the Front National in France or Alternative fuer Deutschland in Germany.
When de Gaulle and Adenauer met at the Elysee Palace in 1956, they were both going strong. More than half a century later both the French and the German heads of government are much weakened, Merkel by disastrous election results and Macron by the “yellow vest” protests. Both needed success of sorts ahead of the elections to the European parliament in mid-May.
The Treaty of Aachen may be primarily a symbolic show of European cooperation. Symbolism matters, though, in times of geopolitical upheavals characterised by Brexit, and when leader after leader wants to put their nation first at the expense of others.
Cornelia Meyer is a business consultant, macro-economist and energy expert. Twitter: @MeyerResources
Original Article