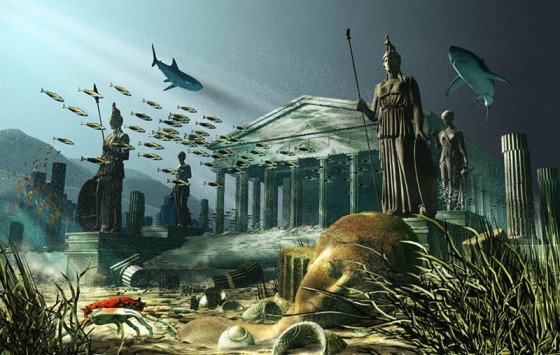 Though some of the mysteries we are going to talk about have been known for a really long time, mankind even today does not have the necessary technology to find out what actually lies behind them, or has a rational explanation of them.

World is full of wonders, strange phenomenons, and things that with today knowledge of facts about them and technology can not be explained. For some of them, scientists have offered rational explanations, while others still remain a mystery.

There is not much information available about these strange, yet beautiful mosaic lines carved in the desert of the Gansu Sheng province in China.  Some records indicate they were created in 2004, but there is no official information about them.  The lines are located somewhere near the Mogao Caves, which is a World Heritage Site.  They span a very huge distance and yet still retain their linear proportions despite the curvature of the rough terrain.

A small clay figurine of a human was found in 1889 at Nampa, Idaho. It came from a well boring, at a depth of around 90 meters, where the clay geological stratum of the Glenns Ferry Formation dates to the Pliocene-Pleistocene transition, around 2 million years ago. The mystery is who placed the figurine at that depth and, more important, how?

There is a drawing in a cave in Japan, showing a spaceship. Today, it is not strange to see pictures of spaceships, but, this drawing dates 5,000 BC.

Nabta Playa was once a large basin in the Nubian Desert. By the 5th millennium BC these peoples had fashioned one of the world’s earliest known astronomical device (roughly contemporary to the Goseck circle in Germany), about 1000 years older than but comparable to Stonehenge. Research suggests that it may have been a prehistoric calendar which accurately marks the summer solstice.

Teotihuacan was a pre-Columbian Mesoamerican city located in the Basin of Mexico, which is today known as the site of many of the architecturally most significant Mesoamerican pyramids built in the pre-Columbian Americas. Apart from the pyramids, Teotihuacan is also anthropologically significant for its complex, multi-family residential compounds, the Avenue of the Dead, and the small portion of its vibrant murals that have been exceptionally well-preserved. Mystery is how mineral mica was built in the pyramids, when this mineral can only be found in Brazil, thousands of kilometers away?

This fossilized giant was found in Ireland in 1895. Its height is 3,71 meters. It was discovered while mining at the nearby mountains. In addition to its size, it is more surprising that on each foot and hand the giant has six fingers.

Cuban underwater city refers to a site thought by some to be a submerged granite complex structures off the coast of the Guanahacabibes peninsula in the Pinar del Río Province of Cuba. In May 2001 submerged structures have been detected off Cuba’s western tip by a Canadian team whose leader is Paulina Zelitzky, president of Advanced Digital Communications (ADC). The site is 660 m deep, and has been discovered by means of sonar based techniques. The structures have been described by Paulina Zelitzky as ‘a huge land plateau with clear images of what appears to be manmade large-size architectural designs partly covered by sand. From above, the shapes resemble pyramids, roads and buildings.

Overtoun Bridge, an arched approach bridge over the Overtoun Burn, has gained media attention because of the unusually large number of dogs that have reportedly leaped to their deaths there over a number of decades.

The Lolladoff plate’ is a 12,000 year old stone dish found in Nepal. It clearly shows a disk shaped UFO.

Surely, you can think of many more world mysteries and wonders which are yet to be explained. Some of these may give you something to think, others may puzzle you, while third will make you curious.